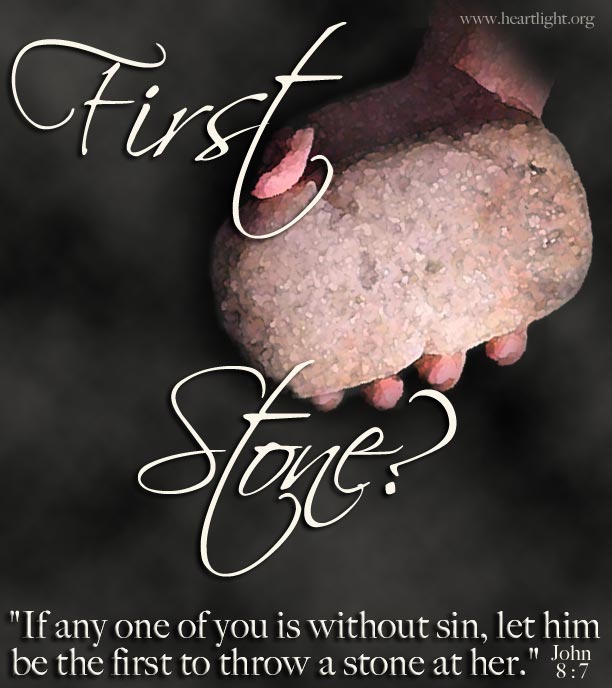 Jesus went to the Mount of Olives. But early in the morning he arrived again in the temple area, and all the people started coming to him, and he sat down and taught them. Then the scribes and the Pharisees brought a woman who had been caught in adultery and made her stand in the middle. They said to him, “Teacher, this woman was caught in the very act of committing adultery. Now in the law, Moses commanded us to stone such women. So what do you say?” They said this to test him, so that they could have some charge to bring against him. Jesus bent down and began to write on the ground with his finger. But when they continued asking him, he straightened up and said to them, “Let the one among you who is without sin be the first to throw a stone at her.” Again he bent down and wrote on the ground. And in response, they went away one by one, beginning with the elders. So he was left alone with the woman before him. Then Jesus straightened up and said to her, “Woman, where are they? Has no one condemned you?” She replied, “No one, sir.” Then Jesus said, “Neither do I condemn you. Go, and from now on do not sin any more.”( John 8: 1-11)

Today’s Gospel reminds us that we are all guilty of adultery . . . if you will accept another dimension of adultery as infidelity. Infidelity of spirit and infidelity to morality.

Isn’t it true that we are often self-righteous like the Pharisees, and ready to spread scandal about others with a bit of spicy gossip.  Isn’t it true that we can be judgmental about the unmarried mother, the people who don’t look like us, the immigrant, the homeless, the alcoholic, the drug addict and the shop-lifter? We decide to set the standard of behavior based upon our inner demons. To make the comparison to the Pharisees even more accurate, how many people involved in Church work are the harshest of critics?

All of us are like this woman. We are truly guilty in the eyes of a holy God. All have sinned, all are caught by God’s justice.

Against that harshness comes this beautiful, grace filled scripture. Just when we are about to be condemned, Jesus steps in to rescue us. Some people may have grumbled that day that sin should be paid for. But it was paid for on a Roman cross outside the city walls of Jerusalem when Jesus died for the sins of the world. Jesus didn’t condemn this woman because he knew that not many days in the future he would be condemned for her when he died on the cross.

There is an expression I once read that has applicability here: “Every saint has a past; every sinner has a future.” If you are a saint, you do indeed have a past and you would be a better saint if you remembered your past and considered what you were before Jesus found you. If you are a sinner, then by God’s grace you can have a wonderful future if you will come to Christ and trust him as your Lord and Savior.

The order of Christ’s words in this Gospel are very important. He didn’t say, “Sin no more and then I won’t condemn you.” Sadly, words like that are the type imposed by humanity. Instead we hear words of grace. And its grace that says “I have forgiven you. Now let me also change your life.” We don’t change in order to be accepted; we change because we have already been accepted. Nothing motivates a new life like grace received into the heart. Grace does what rules can never do.

We thank you Lord Jesus for your life on earth taught us the meaning of love and of forgiveness.  Help us to know more and more of you and your forgiving love. Help us to move away from judgement and to open our hearts to forgiveness

Jesus gave the woman pardon and a new start on life. God’s grace enables us to confront our sin for what it is – unfaithfulness to God, and to turn back to God with a repentant heart and a thankful spirit for God’s mercy and forgiveness. Let each of us know  the joy of repentance and a clean conscience.