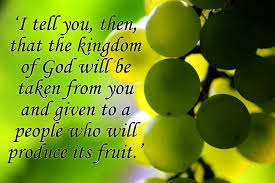 I would not be surprised if there is some confusion in hearing this Gospel this morning. On its face, it is confusing. After all, the chief priests seemed to give the right answer but they are rebuked by Jesus.

The parable was a clear rebuke against the actions of the Pharisees and the teachers of the Law, as well as a significant portion of the people of God who had adamantly refused to believe and listen to Christ the Lord.

The vineyard owner represented God, the Father and Creator of the entire universe. And thus, the vineyard itself represented the creation, the universe, our world. Meanwhile, the vineyard tenants referred to mankind, who had been entrusted with the care and stewardship of the world.

But mankind sinned and rebelled against the will of God, and they refused to listen to Him and they also refused to follow and obey His will. The ones whom the owner had sent to remind the tenants and to get them to honor their work contract were none other than the prophets, the messengers and the numerous servants which the Lord had sent to His people, including Isaiah, Elijah and many others, to lead them and to guide them into the path of righteousness.

However, as the parable told us, the tenants refused to budge, and they persecuted and killed the servants sent by the master of the vineyard, the same that had happened to the many prophets which God had sent to His people.

The son of the owner sent to the tenant refers to none other than Jesus Himself, and He was indeed speaking of what would eventually happen to Him, that he would be betrayed by His own people, he would be  punished and condemned for sins and problems that He did not commit, and he would die a most shameful and painful death on the cross, just as the tenants plotted against the son to gain the ownership of the vineyard.

They refused to listen to the Lord and follow Him because of the evil in their hearts, the pride that obscured the breadth of their wisdom and discerning ability, and the desire for fame and worldly glory — so they were blinded and deafened against the truth revealed by God through Jesus. Therefore, they sinned very greatly against God, and they deserved hellfire, for they did not just condemn themselves, but they also misled countless others into damnation with them.

So where does that leave us. What message are we supposed to carry out of here today? Here is the lead in to the message. Each of us is called to do a self-introspect on our own lives, on our every deeds and actions, and on our lives as a whole, to see whether we have been like the evil tenants in our actions –succumbing to our own personal desire and human weaknesses, succumbing to the temptations of sin and Satan instead of listening to God as we should have.

Allow me the courtesy of reflecting back to you the observations of over three decades in ministry – of serving in five dioceses in North America and seven different parishes.

I have seen people and clergy cleanly divide into two groups. The first are like the tenants of the vineyard. They are filled with pride and a sense of entitlement. They belong to a group that says all I have is mine. I made it, I will give to charity only that which does not affect me. They are filled with a sense of self-worth and pride that allows them to easily judge others. They are quick of tongue in their one sentence put downs of those who do not agree with them. They are quick to sow discord by continuing to mumble and grumble about the things that don’t agree with them. Be careful around those who launch into lengthy discourses about what is right and wrong. Watch for those who act sanctimoniously when they are in Church but their lives betray their professed sanctity. How do you know them or how do you know whether you fall into that group? Listen to them. Listen to their words and watch them. Those are the ones of whom Jesus said:” Therefore I say to you the kingdom of God will be taken away from you and given to a people who will produce its fruit.”

Then there is the other group. Those who realize they are called to a different standard — that they are called to be holy. Called to be holy. Now what could that mean? It’s simple but we don’t think of it very much. Each of us is called to a personal holiness. A personal holiness that says not only do I acknowledge the words of Jesus Christ but I will live the words of Jesus Christ in all that I do and say. It’s similar to the three crosses we make before we hear the holy words of Jesus: “May the words of the Gospel be on my mind, my lips and in my heart.” It’s the realization that all that we do during our day should be bringing glory to God. It’s the prayer that I say every morning: “May the thoughts from my mind, the actions from my hands and the words that I speak bring you glory, O Lord,” And I have seen so many people like that in my life. People who quietly, in their own way, bring glory to God by the way they act, they speak and in the peacefulness of their heart and mind. People who understand the meaning of being a brother’s keeper. Because we are our brother’s keeper and let no one of us forget that. As Catholic Christians, we must be people who understand that we are called to care for one another and to minister to one another, there should not be one among us — in this Church – who should not know the love of others. If thre is one among us who leaves this Church feeling unloved and unsupported then we have failed as a Christian community. The Stephen Ministry was founded with that premise – to reach out and to quietly show the love of God—through our actions – and our caring. Not through pious sounding phrases, not through posturing but through quiet acts of caring and loving. Our Panamanian sisters and brothers who go out twice a month on their mission to the poor is another example.

Now let me close by giving you a vivid example of the type of people in that group that will never be rejected by God. I met them for the first time Friday night at a neighbor’s son’s birthday party. Their names are Nathan and Rebecca. They live in Caldera and are neighbors of Tommy and Saran Kline. They are a young couple in their early thirties with four boys – the oldest of whom is 9. They are a North American couple. They came here over two years ago to visit Rebecca’s parents who live in Panama, When Nathan and Rebecca came, they saw the poverty around them. When they returned home, they decided to return to Panama and start a home orphanage here in Panama for children with special needs. For the last 18 months, they have been working their way through the Panamanian government and hopefully within a year they will open their orphan home for special needs children. These are not Mormons doing a mission, nor Jehovah’s Witnesses seeking to convert, they are simply a young couple, who quietly and with no personal sanctimony  have decided that they will live the words of the Gospel by dedicating their lives to the special needs of those children who have nothing. That, my friends, is an example of personal holiness. That’s an example of the cornerstone upon which the Church of Christ is built. Every single day, we should be asking ourselves:  am I following a path of personal holiness? Every single day.

Pray God that all of us would have the dedication and courage that Nathan and Rebecca do. Pray God that you lead each of us to find our path to personal holiness.