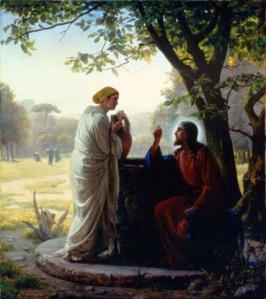 It’s The Act That Could Change Our World

Our world, especially our culture, has changed a great deal in fifty years.  Women and men still suffer physical and/or emotional abuse, but with far less frequency and far less submission.  For most people more education has meant greater maturity in their relationships.  Both genders have learned to communicate more honestly.

Now  join me in reflecting on this moving scene in Matthew’s gospel.  Jesus and his companions are on vacation north of Galilee in Tyre and Sidon.  This is where Canaanites and Phoenicians lived.  Normally Jews did not come there.  Matthew tells this story to teach his community about their proper attitude toward Gentiles.  That is important but consider what this text tells us about Jesus of Nazareth.

A woman comes out to meet Jesus.  She was a woman in desperate need, but there are two problems, two hurdles.  First, she does not belong to the chosen people and Jews never associated with pagans.  Second, she is a woman and women had very low status in the society of the time.  That she was alone and without a name implies she was a social outcast.

The details of the story leave little doubt about the humanity of Jesus.  His lack of maturity is evident.  He reacts out of the cultural bias he has inherited and his attitude toward the woman is negative.  She forces him to confront his narrow prejudices that prevent him from loving her.

In this story Matthew subtly describes Jesus changing and growing.  The Spirit is at work both in the woman and in Jesus.  The woman does not accept the explanations he offers. She does not accept the ethnic, political, religious and gender exclusion that marginalizes so many women.

She called Jesus to think outside of the Jewish box.  She called him to expand the circle of his love.  I suspect Jesus laughed out loud as she confronted him and his immaturity with the bold statement, “Yes Lord, but even the dogs eat the crumbs that fall from their master’s table.”  If he did laugh, surely it was at himself.  He knew the woman was right and all other explanations are of no use.  She forced him to recognize “the God of compassion is the God of all people” and he changed.  As he reached out to her with genuine love he became more fully alive and more fully human!

His growing maturity is evident in the very next paragraph of Matthew’s gospel.  “After Jesus had left that place, he passed along the Sea of Galilee, and he went up on the mountain, where he sat down.  Great crowds came to him, bringing with them the lame, the maimed, the blind, the mute, and many others.  They put them at his feet, and he cured them, so that the crowd was amazed when they saw the mute speaking, the maimed whole, the lame walking, and the blind seeing.  And they praised the God of Israel.”

Today there still are women among us who are alone, marginalized, ill-treated and forgotten.  Like the Canaanite woman their presence calls us to imitate the “unconditional love” we experience in Jesus.  As we do we also will become more fully alive and more fully human.

Like all of us Jesus engaged in the daily struggle to be more fully human and more fully alive.

But our point today is faith. God created everything, the universe, men, women and everything else in it. God embraces all people. God did not create evil, that was from humanity. God looks for all and calls for all. He expects that we should do the same. We should be concerned for all, welcome all. You might say it is not so easy, but think about it. Sure we don’t meet all or even great numbers of people, we’re not all world travelers, or missionaries. But how many do we meet or encounter in a day, in a week? How do we act? What is our demeanor? Do we walk with blinders or are we kind and friendly. Do we see the homeless, the hungry? Sure there are phonies out there, but not all are. My thought is that if we did one good thing a week, encouraged or influenced only one person a week, Christ and faith in him would increase and our reach would be more than we would see. .