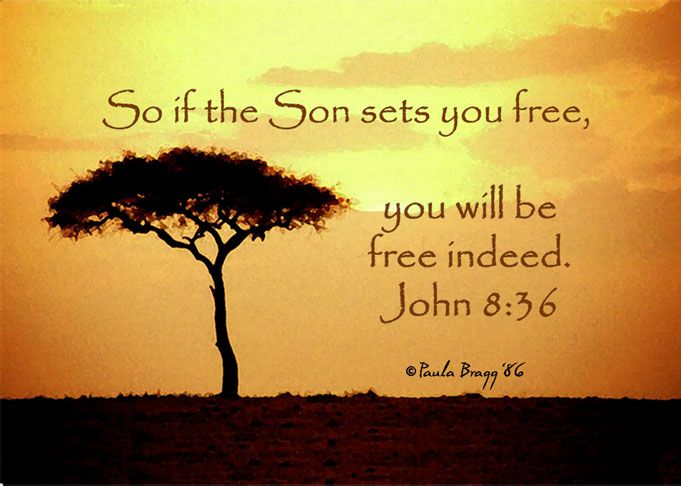 Jesus said to those Jews who believed in him, “If you remain in my word, you will truly be my disciples, and you will know the truth, and the truth will set you free.” They answered him, “We are descendants of Abraham and have never been enslaved to anyone. How can you say, ‘You will become free’?” Jesus answered them, “Amen, amen, I say to you, everyone who commits sin is a slave of sin. A slave does not remain in a household forever, but a son always remains. So if a son frees you, then you will truly be free. I know that you are descendants of Abraham. But you are trying to kill me, because my word has no room among you. I tell you what I have seen in the Father’s presence; then do what you have heard from the Father.” They answered and said to him, “Our father is Abraham.” Jesus said to them, “If you were Abraham’s children, you would be doing the works of Abraham. But now you are trying to kill me, a man who has told you the truth that I heard from God; Abraham did not do this. You are doing the works of your father!” So they said to him, “We were not born of fornication. We have one Father, God.” Jesus said to them, “If God were your Father, you would love me, for I came from God and am here; I did not come on my own, but he sent me.”( John 8:31-42)

Such bigots! They were all too ready to stone a woman to death and then go home to their wives and children. How could they live with themselves? It’s hard to get one’s mind around it. But then that’s what religious legalism is all about. It has no heart in it.

This is what Jesus encountered with the scribes, Pharisees and many of the Religious Leaders. Their legalism and hardness of heart meant that they were incapable of compassion, mercy and forgiveness. How unlike they were to the God whom they worshipped. Such religious bigotry still exists in the world today . We have the tendency to seek security behind laws, rules and regulations, forgetting that these are meant to guide us not control us. The Sabbath was made for man, not man for the Sabbath. It is only a heart that has been softened by the living presence of Jesus that will be able to reach out with love, mercy and compassion. This is the Church’s call to us. In this, Jesus is always our model and example. The more we grow in our relationship with him, the more we become like him. The truth is that the only one who could really throw a stone at the woman chose not to. Rather he showed mercy and compassion. In doing this, and by challenging those religious bigots, he saved her life and gave her a fresh start, a second chance. Didn’t she deserve that? Don’t we deserve that? To them she was just a sinner. To Jesus she was a person, a child of God whom God loved – even in her sin. What good news this was for her! What good news this is for us!

Father, help me to be merciful as you are merciful. Thank you for the many second chances you have given me. May I always be aware of my need to healing and forgiveness and never give in to judgement and condemnation of others. Amen.

Faith isn’t real until it touches our attitudes and, above all, our concrete choices. To “remain” in the word of Christ means to conform our lives to his life and his virtues, especially the virtue of charity, which is the very essence of Christian doctrine and morality. To “remain” in his word is, as some would say, “to walk the walk.” In another passage, we are told that it is not those who say “Lord, Lord…” who will enter the Kingdom, but only those who do the Father’s will in their lives. Remaining in his word is the stuff of sanctity – it’s also the stuff of daily perseverance and of knowing how to get up, dust ourselves off, and begin again each time we falter. How well do I “remain” in Christ’s word? Could an impartial observer see from my attitudes and actions that I follow Christ?