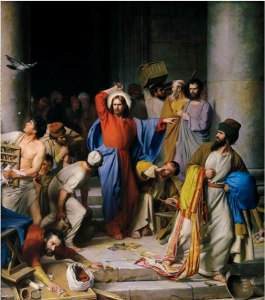 Well, well, well, we have finally arrived at the story of the fiery Jesus, the angry Jesus, the Jesus who does not just speak out but shouts out. It’s certainly not the Jesus we are accustomed to hearing about in the Gospel. And, how appropriate it is, that this Jesus appears to us during Lent.

But what is it all about ? After he performed his first miracle at Cana in Galilee, Jesus made his way to Jerusalem and went up to the Temple to pray and to preach the Good News that He had come to bring to the earth. How surprised he must have been to see the Temple of God, his Temple, filled with merchants and traffickers of every kind! God, in the person of Jesus, enters his own home, and what does he find there? People in prayer?  Levites carrying out their ministry? No! Rather, he sees merchants, traffickers, people who are interested in only one thing: amassing money for their life on earth, instead of praying for their life in heaven.

It wasn’t the way it should have been and Jesus delivers a stern warning. But in that stern warning is also a message about our house and the way we keep it. This next part requires some attention. It was through the Incarnation that God became Man. It was through the Incarnation, that God built himself a house in order to welcome us into union with Him, that house, if you will, was the Body of his beloved Son. In this house of God, in the humanity of the Son of God, we can live in God in order to enjoy his presence and participate in his eternal beatitude. The house of God, his home among men, is first and foremost the body of his Son.

The body of Christ is the true house of God, that which will last forever, eternally! So then, the Eucharist is also, for us, the house of God in which we can live if we want to do so, if we are attentive to the presence of God in this sacrament. Did Jesus not say: “He who eats my flesh and drinks my blood abides in me, and I in him” (Jn. 6:56)? In holy communion, it is no longer Jesus alone who is the house of God, but instead, if we are worthy of it, we too become the house of God among men! What an admirable mystery! What an admirable exchange between God and man in the sacrament of love and peace!

Saint Paul tells us: “You are the body of Christ.” If Jesus lives in us and we in him, then we are his body, we are his temple. God then lives in us, and all those who want to can bear this presence of God everywhere in the world. “ Go and become unto a light to the world”, our God commands us.

As Jesus cleansed the Temple of the animals and money changers, we too should clean our Temples of those habits, those vices, those sins, of all that is offensive to the Lord God. Most of all, we need to clean ourselves of the hypocrisy of our lives. Do you know that’s the sin that Jesus decries most? He mentions hypocrisy 11 times in Matthew’s Gospel alone. It’s that inner shadow which is that part of our self that we don’t want to see, that we’re always afraid of and don’t want others to see either. Our tendency is to hide or deny it, even and most especially from ourselves. Why is that so dangerous?  The shadow self is not of itself evil; it just allows you to do evil without calling it evil. Did you ever think about Jesus’ reaction to sinners? Jesus is never upset with sinners; he’s only upset with people who think they are not sinners!  There are too many who live with this fractured self-ego. An ego which, on its surface, seems so pious to the world while the other half inwardly boils with its own faults. That’s the side which always projects its own faults onto other people and dislikes others for those faults. Jesus’ phrase for the denied shadow is “the plank in your own eye (Matthew 7:4-5). Jesus’ advice is perfect: “Take the plank out of your own eye, and then you will see clearly enough to take the splinter out of your brother’s eye.” If we do not see our own “plank,” it is rather certain that we will hate and attack the exact same thing in others, even if it’s a tiny “splinter.”

We need to stop fooling ourselves because we are not fooling Him. The season of Lent is indeed a season of purification and preparation. It is a season for an honest review of who we are when we call ourselves followers of Christ. Are we doing that this season? Are we admitting to those faults, those vices, those demons within us that clutter the temple of our soul? Those actions and words that deny Him – the living Christ – a proper dwelling place within us. Do we try to give him the gift of what is worthy of him. Or do we prefer to wallow in the darkness of pity, or anger, or non-forgiveness?

Death shall destroy our Temples. But until such time as death does its work, we are called by the grace of the Heavenly Father and the power of the Holy Spirit to sanctify our Temples in Christ. We are called to become holy as God is Holy. To become holy as God is Holy. That is our call during this Lenten season. Pray God that we can be honest enough with ourselves to make our temples worthy of your presence!